Can Geoengineering save small holder farmers from adjuncts of climate change in Uganda? – Guest Post- Morrison Rwakakamba, Agency for Transformation

If geoengineering can work for Uganda, farmers have to be at the center of it.

Farmers interact with the environment on a daily basis. Therefore, nobody will be affected by the hazards of climate change than smallholder farmers. Yet farmers, once empowered with both adaptative and mitigative capabilities can be more resilient and harness development in spite of climate change challenges. But can geoengineering help farmers to adapt and mitigate effects of climate change? Reflecting sunlight from the Earth by geoengineering would undoubtedly cool the climate- but how will this impact on small holder farmers who depend on un-manipulated nature and other ecosystem services for their nature based agriculture. How will a cool climate help farmers to naturally dry their coffee, maize and or millet in Uganda? Are crops and animals adapted to tropical climate in East Africa ready for geoengineered cooler climate? Reporting in Geophysical Research Letters, researchers looked at how the impacts caused by different strengths of geoengineering differed from region to region, using a comprehensive climate model developed by the UK Met Office, which replicates all the important aspects of the climate system, including the atmospheric, ocean and land processes, and their interactions. We are yet to know what this means for East Africa.

But what is Geoengineering? Holly Jean Buck in a 2010 working paper argues that humans have been studying ways to manipulate Earth’s climate for centuries. But it was only in the early 1970s that the term “geoengineering” was used to refer to these strategies for altering the climate, and only during the 1990s that the term became used in mainstream scientific discourse (Keith, 2000: 248). The signifier “geoengineering”is related to a whole set of ways of thinking about nature-society relations, with historical roots stretching back from the Cold War era to the Enlightenment. The concept of geoengineering emerged and grew during the era of neoliberalism (here periodized as 1973 to the present)[1].

If geoengineering can work for Uganda, farmers have to be at the center of it. Why? Farmers constitute over 70% of Uganda’s population and secondly, majority farmers continue to face the brute of climate change with bare hands (limited knowledge, limited access to information and absolute lack of technology on mitigation and adaptation to climate change). The later is unacceptable because once equipped with adaptation tools, farmers constitute huge potential for resilience and turning climate change into an enduring economic opportunity.

While Uganda’s climate offers a great potential for food production, prolonged and frequent droughts in many parts of the country, have led to food shortage (CIA World Fact Book, 2008). Several extreme events (droughts and floods) have occurred between 1991 and 2000, with a particularly long and severe drought in 1999/2000 (CIA World Fact Book, 2008). They have affected many parts of Uganda and most especially the “cattle corridor”, a strip that was across the country from northeast to southwest. Unprecedented and prolonged droughts, acute water shortages and poor and erratic rains that have hit Uganda both in the past and presently have not only left many in the country-side hungrier and poorer but have largely contributed to the overall slowdown in economic growth from 6.6% to less than 5%. Eastern and Northern Uganda experienced heavy rains during the three months of July, August and September 2007 that resulted in severe floods in many locations, this trend has continued to manifest its self as early as March 2008 in east and central regions of Uganda[2].

The foregoing events made sure that 2009 was a year of famine and small holder farmers’ helplessness. At the height of the floods in September 2007, many rivers burst their banks and could not be crossed on foot, some bridges were washed away and roads became impassable. In the worst affected areas some schools, health centers, homes and other infrastructures were destroyed or badly damaged and many families were displaced and forced to seek shelter in school buildings on higher ground. As a result, Food balance sheets for Amuria and Katakwi districts for the period July 2007 to June 2009 indicate that Amuria district would have a deficit of 16 419 tons of cereals, 27 743 tons of roots and tubers while Katakwi would have a cereal deficit of around 3 315 tones but small surpluses in roots and tubers and pulses2. This loss to farmers has been estimated by Uganda National Farmers Federation at over 3 billion Uganda shillings. An amalgam of the foregoing has seen Uganda’s agriculture productivity reduce from 5.6% in 1999 to -0.6 in 2005 and now averaging at 1.3% by 2007 and 3 % in 2014.

Uganda and Africa should look at possibility of geoengineering to save farmers and economies of this continent from the fangs of climate change.

In spite of the glaring evidence of climate change driven catastrophe, many farmers are not yet uptaking conventional adaptation strategies. Adaptation to climate change is more urgent than ever, given both the climate risks facing agriculture and the increasing opportunity costs of failing to address entrenched resource degradation and declining fortunes of farmers in Uganda. Rural farmers who depend on rain-fed agriculture bear the brunt of adverse impacts of climate change. The extent to which these impacts are felt depends largely on the extent of adaption response. A study by Mwerera, R.L.1, Majaliwa, J.G.M..1 & Isubikalu of Institute of Environment and Natural Resources, Makerere University examined farmers’ perceptions and adaptation strategies to climate change and variability. Information was obtained through household survey data. Study results show that many farmers (81.1%) noticed changes in climate; though 62% did nothing. The lowlands were mainly affected by climate change and variability shocks, mainly drought (89.8%). Climatic shocks led to decline in crop yields (39.2%), loss of income (35.1%) and increased incidence of malaria (60%). In Nakasongola (Central Baruli Farmlands & Central wooded savanna) showed that drought is the main shock (89.8%) affecting farmers .Of the farmers interviewed (62%) did not talk any remedial action in response these climatic shocks, though 26% sold livestock and others changed crop varieties, increased the amount land under production and changed crop types. The farmers reported that these climatic shocks led to decline in crop yield (39.2%), and loss of income (35.1%)

A part from the focus on scaling up enhanced land based carbon sequestration through adoption of conservation tillage, promotion of drought resistant varieties (for example, the success of sokedo sorghum), tackling biomass degradation through promotion of charcoal briquettes manufacturing and undertaking interventions to enhance data access and Knowledge dissemination on climate change adaptation to farmers, Uganda and Africa should look at possibility of geoengineering to save farmers and economies of this continent from  fangs of climate change.

[2] Uganda National Farmers Federation and Advocates Coalition for Development and Environment, 2010; Farmers Petition to the President of Uganda and Members of Parliament, pp4 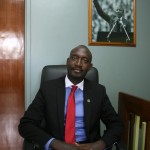 Morrison Rwakakamba is a public policy analyst and a Chief Executive Officer at Agency for Transformation (AfT). In 2004, Morrison joined Uganda National Farmers Federation (UNFFE) and quickly became a Resident Consultant and Manager for Policy Research and Advocacy. He later took up the position of Chief Executive Officer at Uganda National Chamber of Commerce and Industry (UNCCI). Morrison was also the first Uganda Country Manager for Twaweza, a citizen-centered initiative, focusing on large-scale change in East Africa. His study on effectiveness of Uganda’s environmental policies was published by International Journal- The Mountain Research and Development (MRD) Journal in May 2009.