The Indian Minister of Power was quoted recently in a New York Times article titled “Coal Rush in India Could Tip Balance on Climate Change.”  He said “India’s development imperatives cannot be sacrificed at the altar of potential climate changes many years in the future,” India’s power minister, Piyush Goyal, said at a recent conference in New Delhi in response to a question. “The West will have to recognize we have the needs of the poor.”

Through this argument, one can see that India is walking a tightrope between the twin challenges of ending energy poverty for its 400 million citizens living without electricity access while balancing the needs of the hundreds of millions more who will be impacted by a changing climate. Monsoons, the lifeblood of the Indian agrarian economy, are becoming erratic and unpredictable. Coastline populations are finding themselves subject to increasingly frequent inundation during tropical storms. Droughts and heat waves further compound the issues of food security and vector borne diseases on the subcontinent.

Scientists have clearly stated that utilizing remaining fossil fuel stocks and balancing a carbon budget that is required in order to stave-off the worst impacts of climate change is our main challenge.[note]Meinshausen, M., Nicolai Meinshausen, William Hare, Sarah C. B. Raper, Katja Frieler, Reto Knutti, David J. Frame, & Myles R. Allen (2009). “Greenhouse-gas emission targets for limiting global warming to 2 degrees C.” Nature 458: 1158-1162.[/note] India, under its current trajectory cannot help the world stay below the 2 degrees centigrade temperature “guardrail” suggested by scientists. The largest planning exercise by the Indian government imagining its future energy scenarios through an integrated energy policy report suggests that India will emit upwards of 4 gigatons of CO2 annually, even in its most renewable energy-heavy scenario.[note] Planning Comission, I. (2006). Draft Report of the Expert Committee on Integrated Energy Policy. P. Commission. New Delhi, Government of India: 1-125.[/note] A simple indexing exercise pegging India’s emissions to the “South’s Dilemma”[note]The South’s Dilemma is the carbon budget that is remaining for non-Annex 1 countries after the earlier peaking and reduction of emissions from Annex-1 nations if the world is to prevent annual global temperatures from crossing the politically agreed-to 2 degrees centigrade target. See: Baer, P., Tom Athanasiou, Sivan Kartha, and Erik Kemp-Benedict (2008) The Right to Development in a Climate Constrained World. The Greenhouse Development Rights Framework[/note] under a 2 degrees guardrail, suggests that India would have to peak its emissions at only 2 gigatons of CO2 annually by 2020 and then start reducing them further[note]Singh, K. “India’s Emissions in a Climate Constrained World.” Energy Policy Journal. 39 (2011) 3476–348.[/note] Comparing this to US emissions that stood at 5.27 gigatons of C02 in 2012, India’s peak under a 2 degrees scenario smacks of inequity. 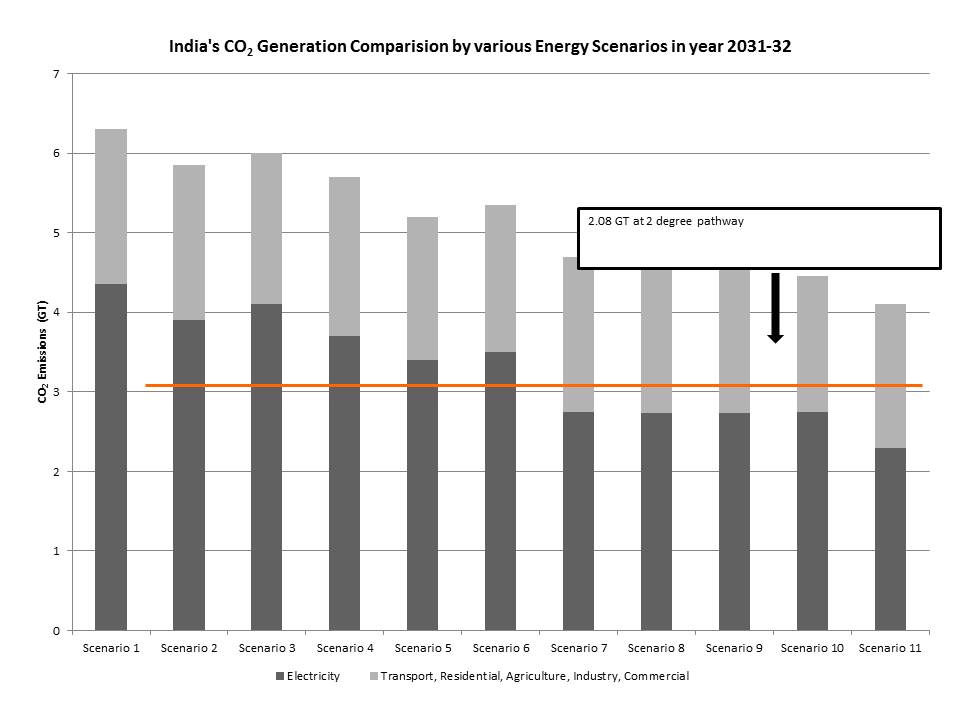 Given that China is decades ahead of India in terms of human development and poverty reduction and is only planning on peaking its emissions by 2030, the likelihood of India doing so at an earlier date and at a much lower level is highly unlikely because of its overwhelming need to address energy poverty. Couple this with recent reports that India’s coal consumption could “tip the balance” of global climate change, and the world is facing a dire scenario.

Who could argue however, that 400 million more Indian citizens should not be brought out of the dark? If the world is indeed headed towards a 4 degrees centigrade world, then what the energy poor need, is more energy to survive (read: adapt) to the coming changes? Furthermore, as the 1.6 billion people who currently live without electricity access worldwide and the 2.6 billion who still cook by burning biomass as fuel are provided modern commercial energy, we will be staring at a high(er) energy planet.

By tackling the issue head-on, and allowing for coordinated research within the guidelines of an international agreement, geoengineering experimentation could see the maturity of technologies that might help avert the worst of climate impacts.

While the debates on energy access and climate change have always remained at an arms length, perhaps sustaining those currently living in energy poverty in this state perpetually, the time has come to merge these two issues. If we agree that dangerous climate change must be averted, and that the energy needs of the poor must be met genuinely, then opportunities for innovation abound. It is in this scenario that one could see a role for climate engineering technologies. By tackling the issue head-on, and allowing for coordinated research within the guidelines of an international agreement, geo-engineering experimentation could see the maturity of technologies that might help avert the worst of climate impacts. Technologies that facilitate carbon sequestration might offer a starting point. Perhaps bringing them out of the shadows and treating them as simply potential technological solutions that are part of a bigger toolbox could buy humanity some more time to slow down the worst impacts of climate change. 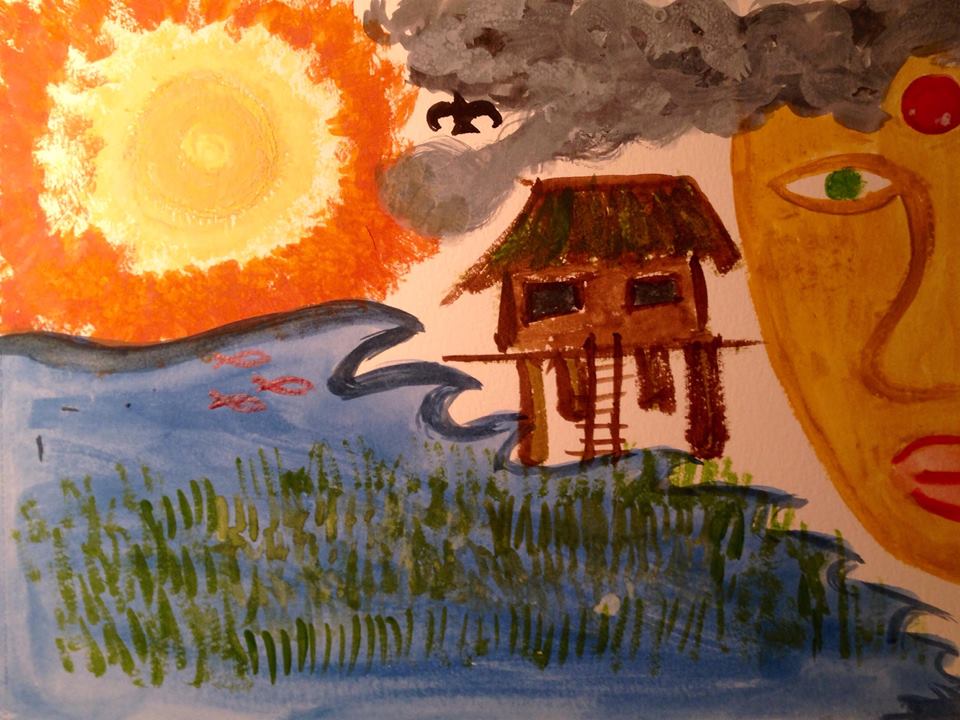 The irony is that we have arrived at a point where geoengineering solutions seem like a real possibility to avert or slow down the onset of run-away climate change.  And while the Arctic continues to melt in a warming world, major powers are more interested in the hydrocarbon resources and shipping routes that will be unlocked by the receding ice.  So blinded is the discussion to the irony on ice that politicians and heads of state see no problem beginning to jostle for their geopolitical rights to a rapidly changing geography.

At the very least, we must not miss out on the opportunity for innovation that coordinated research on geoengineering technologies presents us with (who knows what we might discover along the way?).  Furthermore, rules that govern how such research or experiments are carried out and by whom, must be put in place before we are faced with a scenario of misuse of technology or botched experiments that create cross-boundary ecological disasters with no mechanism in place for recourse.  Perhaps a country with high innovation capacity like India, with so much to lose, and so much at stake in addressing both climate and energy justice will create the kinds of technologies to help solve these challenges. 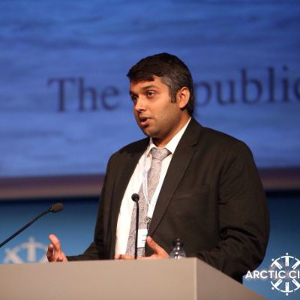 Kartikeya Singh, a PhD candidate at The Fletcher School and CIERP Doctoral Research Fellow, received his Master of Environmental Science degree at the School of Forestry & Environmental Studies at Yale University. He is the founder of the Indian Youth Climate Network (IYCN), and has served as part of the negotiating team of the government of Maldives at the UN climate talks from 2009 to 2012.