The Washington Geoengineering Consortium is pleased to present the first in a new series of forums on climate engineering. This new series is designed to produce open and frank exchange between people with divergent viewpoints on critical issues.

We have invited Jim Thomas of the ETC Group and Andy Parker of the Institute for Advanced Sustainability Studies in Potsdam, Germany to open this new forum series.

The question: is climate engineering worthy of consideration?

“There’s so much potential here for taking energy away from real responses to climate change,” said Jim Thomas of the ETC Group, a research organization that opposes geoengineering because of its potential impact on poor countries. As for experimentation to test some of the ideas, he said, “it shouldn’t happen.”

“There may come to be a choice between geoengineering and suffering,” said Andy Parker of the Institute for Advanced Sustainability Studies in Potsdam, Germany. “And how we make that choice is crucial.”

We asked Jim and Andy to engage in a back and forth dialogue, expanding on the positions attributed to them in the article and responding to the positions they attribute to one another. The dialogue proceeded through two rounds of comment and response, with Jim providing the opening statement.

We should note that the WGC does not formally endorse nor support any position expressed in the exchange below. Rather, our aim here, as always, is to provide a space for direct and productive dialogue.

Here, then, is the back and forth between Jim and Andy:

I am uncomfortable with your rhetorical posture that, “it’s geoengineering or its suffering, folks.”  This stark choice may appear “tough” and “pragmatic” but it’s a false choice that strips away all context, history, imagination and agency. Don’t feel singled out—this rhetorical device is commonly employed by enthusiasts for many controversial technologies: “Embrace GMO’s or the third world will starve;” “Opponents of DDT are responsible for malaria;” etc.

As a Brit of a certain generation such false choices always put me in mind of Margaret Thatcher’s dictum of TINA (There is No Alternative). She was talking about the unfettered free market and of course she was wrong.  So too for addressing climate change: There ARE plenty of alternatives to geoengineering the planet. It’s just that powerful corporate lobbies strongly prefer that politicians do not consider them—indeed find “hacking the planet” more palatable than approaches that challenge their own power.

Here’s one alternative: abolishing industrial agriculture and returning land to peasant producers. By any assessment industrial agriculture is a major contributor of greenhouse gases.  It degrades soils, wastes energy, clears forests, belches nitrous oxide and methane, hogs 70% of the land and only feeds 30% percent of the global population in doing so. By contrast agro-ecological peasant farming systems feed the remaining 70% on only a third of available land, enriching soil fertility and with little emissions. Want a stark choice? It should be a no-brainer that climate policy would lead with constraining industrial agriculture while switching to proven farming systems that both feed people and cool the planet. That’s not an option of ‘suffering’. It’s an intelligent option of hope and resilience, returning agency and rights to billions in strong communities.

It’s geoengineering that shuts down the future and renders it grimly choice-less.

Thanks for your message. I think our disagreement is about the scale of the threat of climate change, and the options for dealing with it. I’m going to lay out the thinking behind my quote and you can tell me where I’ve gone wrong.

We must aggressively cut our greenhouse gas emissions and hugely increase investment in adaptation. But no matter how much mitigation we do we’re committed to decades of warming – of floods, storms, desertification, species loss and drought – thanks to past emissions and inertia in the climate system. Adaptation will help, but it can’t deal with everything (such as ecosystem loss).

To be unambiguously clear—this doesn’t mean that we should do geoengineering. The cure might be worse than the disease. But we must research and understand all our options. Sticking your head in the sand will not make the unpleasant realities of climate change go away.

How we make choices over geoengineering is going to be crucial. How can we ensure research is transparent and safe?  How do we stop it distracting from emissions cuts? How can we ensure the participation of the world’s most vulnerable people?  I encourage ETC to join the conversation constructively rather than sniping from the sidelines, misrepresenting the science and attacking climate scientists – leave that to the right-wing think tanks.

I agree that addressing the impacts of farming is very important, but this is a form of mitigation. It’s misguided to think this can solve climate change, and irresponsible to go around telling people that it will.

Some simple questions then. What’s your plan for dealing with the risks that can’t be addressed by adaptation and mitigation?  What if we don’t mitigate enough?  Or adapt enough?  Or if climate sensitivity to CO2 is worse than we thought?

Thanks and no, I don’t think we disagree about the scale of the threat of climate change.

I think we have a disagreement about technofixes:

To my mind it’s wrong to think that climate change is the sort of “problem” that can ever be “solved” by technical solutions however big and clever they sound.  The “climate problem” is not just a wiring error in our energy system or a maths puzzle about carbon in the air; it’s more complex than that. It’s about billions of people living together in a closed, coupled system and is deeply entangled in social, political and economic root causes. Resolving the threat of climate change requires changing political, social and economic  relations. Chasing technofixes is at best a distraction and at worst a ploy. The worse our climate situation gets the less plausible the existence of a silver bullet

Maybe a disagreement about which crises to fix:

I don’t believe we can partition off the climate crisis and try to “fix” it in isolation from the wider crises unfolding in our society (inequality, hunger, extinction). Addressing climate in the context of these favors fundamental societal interventions (shifting economic goals, shutting down industries and rolling back monoculture), and not just unidimensional responses labeled “mitigation,” “adaptation,” etc.  It means attacking and resolving root causes. That’s the dead opposite of a geoengineer’s “end of the pipe” mindset.

And a disagreement over boundaries:

Our head isn’t in the sand: ETC Group has been encouraging global discussion about geoengineering for nearly a decade. But yes, we do draw a line in that sand: we oppose developing geoengineering technology in the real world. To cross that line (with field trials, hardware tests) is to unnecessarily usher geoengineering into being before society has agreed to that final and terrible trajectory, before meaningful, radical approaches have even been tried.

And we probably disagree about the word “we”:

You say, “How we make choices over geoengineering is going to be crucial.” I can only agree if the “we” is assured to be a larger, global, inclusive “we”—not some elite “geoclique” itching to uncork the geoengineering genie on behalf of an unwitting humanity.

Thanks for your message. You made no attempt to answer my questions and I’m left wondering if ETC will ever engage seriously with global warming.

Of course it’s crucial that we address inequality, hunger, and species loss.  But let’s not confuse important things – none of these will stop Earth from warming up.  Your main proposal – forcing humanity to return to peasant agriculture – is at best unrealistic and at worst reckless.

As I think you know, solar geoengineering is the only currently known method for quickly stopping the planet from warming.  The evidence indicates that it could greatly reduce climate risk (both temperature and rainfall changes) while we get CO2 concentrations under control.  To my mind this at least means we should research it.  I’ve spent my whole professional life working on climate change and would prefer it if we could deal with global warming by mitigation alone. But we have got ourselves into a hole so deep that – sadly – we cannot afford to ignore geoengineering.

No one I know who works on geoengineering is saying that it’s a solution to climate change or an alternative to mitigation and social change. Why do you make out that it’s an either/or choice? By pushing this false dichotomy you’re giving great assistance to those who want to frame geoengineering as a substitute for carbon cuts.

By seeking to block the development of something that might greatly reduce suffering you are taking an enormous gamble with the lives of the world’s poorest people, apparently just to further your own ideology.  Is ETC Group really comfortable with this?  What about ETC’s funders at the Lillian Goldman Charitable Trust, CS Fund, Swedbio and Oxfam-Novib? I suggest that you think carefully about your priorities. Are you so certain that all global social systems will be remade in line with your particular vision that everyone can ignore a potential means to protect vulnerable people and fragile ecosystems? What if you’re wrong?

[A note from the WGC]

At the conclusion of the exchange, Jim Thomas requested that the following message be conveyed to readers of the forum:

ETC Group disputes the claim that they oppose all geoengineering research. See ETC’s website to learn more about the group’s position: www.etcgroup.org/issues/climate-geoengineering

Andy Parker is a Research Fellow at the Institute for Advanced Sustainability Studies (IASS) in Potsdam, focusing on the politics and governance of research into solar geoengineering. Before joining the IASS he spent two years as research fellow at the Harvard Kennedy School and four years as a Senior Policy Adviser at the Royal Society, where he led the production of the 2009 report “Geoengineering the climate” and the development of the Solar Radiation Management Governance Initiative (SRMGI). He was a member of the UN Convention on Biological Diversity’s expert working group on geoengineering and co-led the Royal Society’s policy work on climate change, environment, and energy. 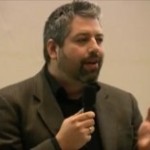 Jim Thomas is a Research Programme Manager and Writer with ETC. His background is in communications, writing on emerging technologies and international campaigning. For the seven years previous to joining ETC Group Jim was a researcher and campaigner on Genetic Engineering and food issues for Greenpeace International – working in Europe, North America, Australia/New Zealand and South East Asia. He has extensive experience on issues around transgenic crops and nanotechnologies has written articles, chapters and technical reports in the media and online. Trained as a historian to look back at the history of technology, Jim is now busy communicating the future of technology. He’s a big fan of storytelling, slam poetry and sushi.