The most important ethical element of geoengineering is scale.

Climate change is real, it’s happening, and it’s scary. The world of politics is hardly helping: it seems that the only measures that pass the political process are best described as “too little, too late.” Experts and decision makers are getting desperate, which may be why they have begun discussing drastic efforts such as climate geoengineering. The Royal Society defines geoengineering as “the deliberate large-scale manipulation of the planetary environment to counteract anthropogenic climate change.”[1] This means, in short, changing the climate on purpose, in order to un-do the accidental climate change we’ve already engendered. Technological might may win where political negotiation and voluntary self-sacrifice fails.

Desperation is hardly a recipe for wisdom, but it is a strong motivation just the same. In a gloomy article that mostly argues against geoengineering, James Lovelock nevertheless concedes, “We have to marshal our resources soon and if a safe form of geoengineering buys us a little time then we must use it.”[2] Despite its challenges and downsides, climate geoengineering may be the best chance we have for maintaining a planet that is habitable for humans and the other creatures who are our neighbors. We need our best thinking to address such a drastic situation, and this includes the humanities – philosophy, religion, literature, and so forth.[3]

As Clingerman and O’Brien aptly argue in a prior post for the Washington Geoengineering Consortium blog, much of the discussion of geoengineering is religious in tone. “Both sides of the debate use the same metaphor of ‘playing god’,” they note, recognizing that intentionally altering the climate puts humans into a domain previously reserved only for deities.[4] They use the Tower of Babel as a Biblical metaphor for human hubris and agency taken too far. Clingerman points out that many religions include rain gods and other deities of the weather; appeasing such gods was an early attempt by humans to control the weather, and to this day “the sheer unpredictability of climate often necessitates a religious response.”[5] Clingerman provocatively suggests that the rain dances and other weather prayers of religious people constitute the first human attempts at geoengineering.[6] Even in 2011, Texas governor Rick Perry called on his citizens to pray for rain in a time of drought and wildfires.[7]

According to Clingerman and O’Brien, the geoengineering debate is, arguably, “about sin, repentance, pride, and virtue.”[8] They see two major schools of thought butting heads in this debate. Some worry that the ambition to engineer the climate is a demonstration of human hubris or pride, and the proper response would instead be “a penitent retraction.” Others suggest that “the urgent moral failing to be solved is inaction” – we succumb to the sin of sloth, doing nothing when the situation requires bold action.[9]

The contrast between pride and sloth echoes a basic conundrum of Christian ethics described by Reinhold Niebuhr in The Nature and Destiny of Man. Niebuhr describes pride as “a will-to-power which overreaches the limits of human creatureliness.” This rebellion against God, which is a desire to “usurp the place of God,” leads to a disturbance of “the harmony of creation,” and also to injustice.[10] The other major human sin is not sloth exactly, but “sensuality.” While pride refuses to accept human finitude, sensuality refuses to accept human freedom. It is an abdication of responsibility, not unlike the torpor of sloth.[11]  These two are a kind of Scylla and Charybdis, twin perils to be avoided and navigated between.

Niebuhr’s depth of insight on pride was not matched by his insights about sensuality. It took other thinkers – most notably feminists such as Valerie Saiving – to fully excavate the dimensions of pride’s partner sin. Saiving calls this sin “underdevelopment or negation of the self,” and it is a kind of self-erasure or abdication of the responsibilities of personhood. I would argue that this failure to recognize, cultivate, and properly use one’s own power is indeed a sin.[12] In a sense, both pride and sloth can be understood as the misuse of power. The question of how best to use power is a question about human agency. In the words of Galarraga and Szerszynski, are we architects, imposing order on the climate? Are we artisans, responding to the climate’s inherent qualities? Are we artists, envisioning and building new worlds?[13]

While I appreciate Galarraga and Szersynski’s work on models of human agency, and I enjoy Clingerman and O’Brien’s exploration of religious imagery, I think that both of these are off track. The most important ethical element of geoengineering is neither its implicit view of nature vis-à-vis humanity, nor its navigation of the twin perils of pride and sloth. The most important ethical element is scale.

Geoengineering is by definition large scale. Scale is important, because the scale and scope of our technology determines both its environmental impact and whether it’s too big for our human minds to handle. Scale is what tempts us to pride – thinking we can do it all – and to sloth – getting overwhelmed by the scope of an issue.

For this reason, my preferred metaphor comes from Alice in Wonderland by Lewis Carroll. In this story, Alice becomes unexpectedly larger and smaller through eating and drinking. We humans, too, have unwittingly changed the size of our ecological footprints through our consumption. Alice’s experiences changing size disorient her with respect to her identity, but she is helped by the caterpillar who (in a cryptic way) indicates that if she eats one side of the mushroom, she becomes larger, but if she eats the other, she becomes smaller. Through some cautious experimenting, Alice determines the proper techniques for controlling her size. In so doing, she can become the right size to enter the garden – a size which is smaller than her everyday scale, but not so small that she disappears.

I like this story, and the symbolism of it, because it takes us beyond the extremes and toward a sense of what a carefully negotiated middle ground might look like: what an appropriate response to environmental concerns of all kinds (including climate change) might entail. We do need technologies and techniques. But rather than guzzling the pre-packaged “eat me” and “drink me” substances, Alice learns to carefully use forces from nature (the mushroom) to control her size (please set aside the connotations of psychedelic drug use here – I am talking about general consumption and its environmental impact). Her first encounters with her own powers of changing size were uncontrolled and somewhat destructive (she cried a true flood of tears when she was first oversized). Through learning techniques, however, and careful, informed consumption, Alice is able to use her power to become huge or tiny in a way that is appropriate to her goal: the garden.

Geoengineering is morally suspect because of its scale and impact. Many feel that doing these things may be “playing God” because of the scale involved: to intentionally shape the climate seems well beyond our puny scope. Like Alice, we didn’t know that our activities would make us grow to a huge size; we didn’t know that we’d be causing a flood if we burst into tears. But now we do know, and like Alice, we need to use our power responsibly. Alice could have kept herself large and used her might to kick in the door of the garden; but her choice was to become right-sized for the scale of the garden, to use the key, and get in with minimal damage. Similarly, with geoengineering, we should make ourselves right sized for the ecosphere, use appropriate tools, and mitigate climate with minimal damage.

Geoengineering is morally suspect because of its scale and impact.

It is time to mobilize a technological response to climate change, yes. But let it be an appropriate, right-sized response. I agree with Robert Olson’s arguments in favor of “Soft Geoengineering,” in which he prioritizes the development of “technologies that touch gently on biological and social systems.”[14] Olson calls for research into easily reversible, scalable, minimally damaging efforts such as “bright water” in the oceans, “Ice911” to cover melting ice with reflective material, “Direct Air Capture and Use of CO2,” and carbon capture through soil building and biochar.[15] The more drastic versions of geoengineering should be true last-resort measures. First, let us turn our swords into plowshares (to use another Biblical image): we know how to “green” our technology and maximize efficiency. There is money and power in the balance here, but also human and non-human lives at stake. I know we feel desperate. But desperation is not the best way to wisdom. We need continued public ethical discussion of these issues, and the conversation must include religion, philosophy, and literature to clarify and strengthen the quality of our thinking about climate geoengineering. 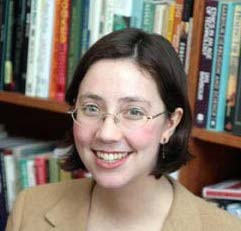 Professor Laura M. Hartman has a PhD in Religious Studies from the University of Virginia.  She joined the faculty at Augustana College in 2008, and focusses her work on environmental, sexual, social and medical ethics.  Hartman is the author of The Christian Consumer: Living Faithfully in a Fragile World. Oxford University Press, November, 2011.

[3] I know that this global-scale problem should not be addressed solely by cultural resources deriving from Europe or North America. I would love to see perspectives on this topic from Asian, African, indigenous, and other viewpoints. But my training is in European and American thought, so that is what I have to offer right now.