Mankind has always been in search of “green pastures”, a better place where to live. Scientific findings on the global warming have unveiled several scenarios of an eventual cataclysm on the earth planet. Hence, the scientific community has devised several mechanisms, including technologies that can track the causes and alleviate the impacts of climate variability and change.

Some of the technologies developed and tested over the last two decades aimed at correcting climate “deviations” using different interdisciplinary strategies for “climate adaptation and mitigation.” However, preliminary evaluations have shown that adaptation and mitigation interventions alone may not “fix” the climate system over the next millennium. Something has to be done to prevent a global climatic catastrophy. That’s where the idea of transdisciplinarity came into existence to gather the best brains of all the disciplines to come up with a more integrated, efficient and sustainable solution to the issue of climate change. Geo-Engineering or Climate Engineering (CE) is propounded to be such a new field and technology that may “fix” the climate system over the next few decades. But why would such a “great idea” elicit contradictions among different divides of the scientific community? Would CE prevent humanity reaching the “promised land”? Here are some uncertainties usually evoked by scientists.

First, CE pretends to control the global climate system by veiling solar radiation (SRM) and removing CO2 emited in the atmosphere (CDR). Are these two mechanisms sufficient for driving the atmospheric pressure system, ecological and biological systems of the whole planet to the best?

Would there be a global consensus on a “almighty“ institution that would coordinate and govern the global climate?

Secondly, CE is difficult to be properly coordinated and governed owing to its dimensionlessness and diverse regional impacts on temperatures and rainfall. There are also multilateral sources of command, various uncoordinated levels of powers, different interests on stake and lack of international arbitration and consensus on enforcement of international legislations. Would there be a global consensus on a “almighty“ institution that would coordinate and govern the global climate?

Thirdly, CE addresses the shortwave incident radiation without addressing the issue of outgoing long wave radiation that increases earth’s temperature beyond unbearable limits. Is “earth’s radiation management” not better then CE in a real world?

Fourthly, no one knows how often would aerosols be “injected”, mirrors “projected” and oceans be “seeded” to stabilize earth’s temperatures in case of CE deployment. Would CE work, what else should be done to address all impacts of rising GHGs (e.g. ocean acidification)? If CE would not work, what should be quickly done to stop very rapidly increasing temperatures on the earth surface? What “climate emergency” strategies are to be put in place to prevent that the effects of climate change become unbearable? In what case would a rapid deployment of CE generate a collective consensus on climate emergency?

It might be a good idea to control solar radiation and CO2 emissions to ease temperatures on the earth surface but its unintended impacts on life supporting systems call for increased research and governance precautions prior to CE deployment to ensure the development and survival of all ecological and biological systems of our “alma mater”, the earth.

All human beings need to be aware of what is going on and decide on their destiny, without necessarily achieving consensus around CE deployment. They must speak out with tolerance and wisdom because the lives of all life supporting systems are at stake. They need to discuss CE research and deployment NOW and ACT LATER, when the adequate time will be there. Research dissemination, community service and political dialogue are needed to guide and monitor science and technology around CE development and deployment to achieve desired conditions on the earth we want, a better home for all. 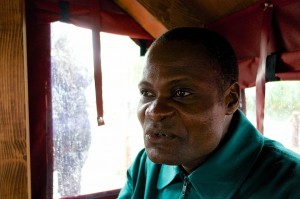 Dr. Cush Ngonzo Luwesi is a Lecturer at Kenyatta University, Nairobi, Kenya. He is widely published on water governance, forestry, and agriculture.  Dr. Luwesi was previously an Evaluation Officer in Ministry of Energy, Government of the Democratic Republic of Congo.  Many of his publications can be found here.