What of 2C? – Aaron Kressig

The Forum for Climate Engineering Assessment asked one of its researchers to answer the question: “Who is saying what about the likelihood of staying below a 2 degrees Celsius rise above pre-industrial atmospheric temperatures?” The results beg the question, should researchers and policy-makers be thinking more seriously and openly about climate engineering research?

Since the Copenhagen Accord in 2009, the goal of the international climate talks has been to hold global warming to a 2 degree Celsius rise above pre-industrial levels.

The start of the 21st Conference of the Parties to the UN Framework Convention on Climate Change in Paris is days away, and intended nationally determined contributions (INDCs) have been submitted by 150 countries.  Climate scientists have begun to calculate how we are doing on the 2C goal, and the math is a little frightening. Not only do we have little wiggle room in terms of how much carbon we can emit to have any certainty of staying under this limit, but it will be global actions in the next two decades that determine our fate.

The calculations of planetary warming and average temperatures can be a difficult concept for anyone to get their mind around. One way to understand this topic is through the lens of a global carbon budget. This is the amount of carbon emissions that the planet can release and still stay under our stated goal. The most recent Intergovernmental Panel on Climate Change (IPCC) report estimated from 2011 onwards we would need to emit less than 800 billion tonnes (Gt) of C02e (carbon dioxide equivalent, a measure that takes account of the warming potential of other greenhouse gases) to have a 66% chance of staying under 2C. From 2011 to the end of 2015 the combined effect of greenhouse gas emissions has reduced our remaining quota to 603 Gt of CO2e. While the exact calculations that go into carbon budget estimations are hotly contested, they all agree on one thing: the budget is disappearing quickly.

In order to understand the magnitude of the 2C challenge, it’s helpful to analyze some models which show how the world could, theoretically, stay under 2C. 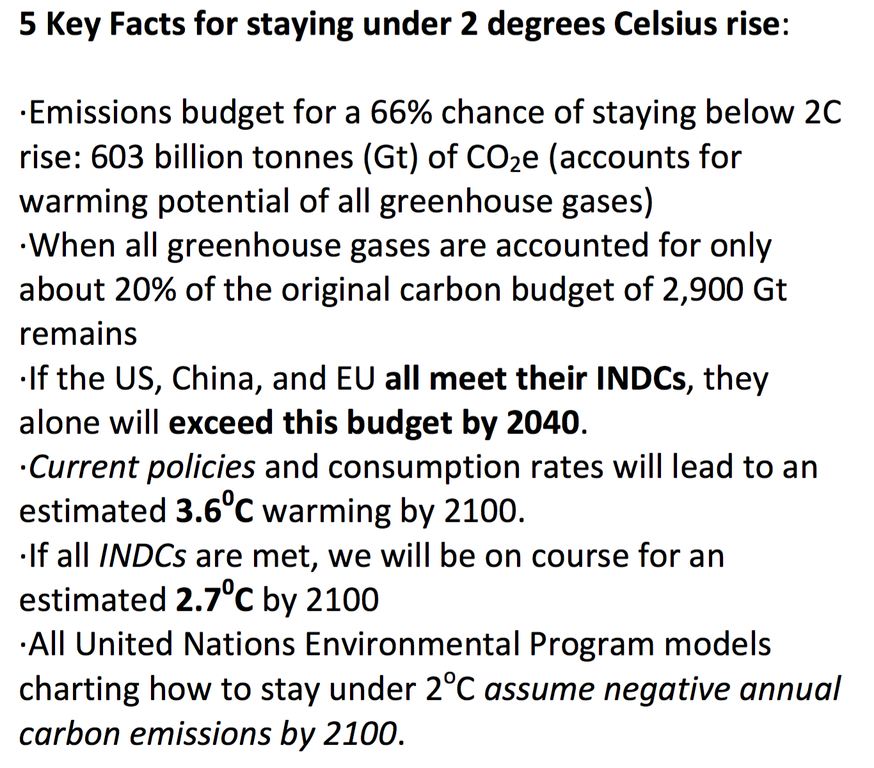 The Cambridge Architectural Research model shows a pathway that gets us close to our goal. The model has the world peaking emissions in 2016, decreasing by 17% by 2030, by 50% in 2050, and slowly reaching zero carbon emissions by 2100. This model, which proposes radical efforts towards emission reductions (especially by the developing world), would leave us less than a 50% chance of staying under the 2C threshold.

What about the INDCs that the world’s nations have laid out as a pathway towards emission reductions? These efforts represent a historic event in global climate governance, and offer the world for perhaps the first time a real strategy towards reducing our effect on climate change. However, even if all of these INDCs were met, we would still be short of our goal. The Climate Action Tracker, “an independent scientific analysis produced by four research organisations tracking climate action,”shows that if current INDCs are met, we would be on track for a range of warming between 2.2-3.4 degrees Celsius. It also shows that if current policies are held in place and INDCs are not moved forward, warming by 2100 is projected to be between 2.9-4.6 degrees Celsius.

Research outlined in a paper released in October in Environmental Research Letters makes the challenge of achieving the 2C goal through the current INDCs even more tangible. The research shows that even if INDC goals were achieved, the EU, China, and the US alone will use the remaining global carbon budget allowed to the world, if we are to have a 66% chance of staying under 2C by 2040. This means that 2 billion people are likely to push us over the limit in the next 25 years, and does not even begin to account for countries like India, Brazil, South Africa and others whose fossil fuel use are still increasing. This paper provides real doubt on whether it is realistic to think that 2C is a possibility unless drastic political action is taken.

What’s more troubling is that there are many signs emerging that even accomplishing our current INDCs may be hard enough to achieve, given rising demands for power. For instance, though it has ambitious plans to improve energy efficiency and increase solar and wind power production, India’s Central Electric Authority recently released its plans to double its electrical capacity powered by coal-fired power plants in the next five years. China, which uses more coal than any other country, in October was found to have been under-reporting its coal consumption by up to 17%, according to research done by the New York Times.   Even with drastic action beyond INDCs by the developed world, emissions from increased power needs of the developing world may be enough to take us over the limit.

The developed world is also faced with uncertainty regarding its INDCs. Despite recent surges in the renewable fuel industry, investment in renewable energies may plateau in the coming years. The International Energy Agency’s Renewable Energy Report predicts that electrical generation from renewable energy will grow from 22%-26% from 2013-2020, but then is expected to level off. Policy uncertainties regarding subsidies, conflict with established fossil fuel industries, and continued need for innovations and improvements to renewable capacity may lead to the leveling off of their growth in the developed world. With Japan, Europe, and the United States lukewarm about nuclear power, it would seem the world’s major economies will continue to rely on fossil fuels for a major portion of its electrical generation.  This creates great uncertainty around the ability of the world to meet their INDCs, which as stated, are not enough to keep us at 2C.

Scientific reports emerging in the last year as the world prepares for the international climate talks reveal several important points. For the first time there is scientific evidence to show where our current actions are taking us, and while there is progress, our trajectory is frightening. Global efforts are insufficient and novel strategies must be undertaken if we are to have any chance of staying below the 2C threshold. The idea of the carbon budget has allowed the world to see the direct relationship between emissions and temperature rise, and has demonstrated that current emission rates do not correlate with the goal we have laid out. If we are serious about our goal, this means a change of strategy is in order.

The critical years for limiting warming in the 21st century are upon us right now. The infrastructural transitions towards energy efficiency and renewable energy must be made now; if we wait even five years, it may be too late to chart a pathway to stay under 2C. Transitions take time, and we are running out of it.

I’ve included below a break down of the findings of my research for this post.

∙INDCs alone will not be enough to achieve 2oC with any certainty, and policy uncertainties regarding alternatives in developed world and plans for increased fossil fuel use in the developing world lead to questions about whether INDCs are even a realistic possibility.

∙China, the US, and the EU alone have the potential to push us over the carbon budget by 2040. 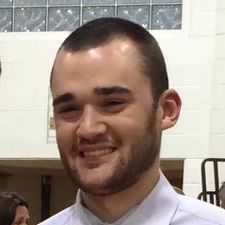 Aaron Kressig is a research assistant with the Forum for Climate Engineering Assessment and an intern in the Climate and Energy Program at World Resources Institute. He graduated with a B.A. in Geography from the University of Missouri in May 2015 and is currently a first year masters candidate in the Global Environmental Politics Program in the School of International Service at American University.