The National Academy of Sciences have released their long-awaited assessment of the scientific foundation for climate engineering. The work of the authoring committee resulted in two separate reports, one titled Climate Intervention: Carbon Dioxide Removal and Reliable Sequestration, and the other titled, Climate Intervention: Reflecting Sunlight to Cool the Earth .

Here, I offer, as a way to spark additional conversation and reflection, just a few remarks based on a dive into the reports’ framings and arguments.

For more on the NAS reports, see our press roundup, our roundup of civil society statements, and our collection of brief reflections from a range of figures active in climate politics.

In no particular order, here are my top five takeaways and queries from the NAS reports:

Perhaps the most welcome (and to my mind, perhaps the most surprising) aspect of the reports is their sustained focus on the governance challenges associated with climate engineering proposals. On “albedo modification,” as the report calls the suite of technological response options that have traditionally been grouped under the heading solar radiation management, the report makes clear that uncertainties on the physical science side are dwarfed by even more significant uncertainties about the possible social, political, and economic costs that might attach to efforts to reflect incoming solar radiation.

The report authors put it this way: “…  even the best albedo modification strategies are currently limited by unfamiliar and unquantifiable risks and governance issues rather than direct costs.”

Now, it should be said that this nod to the governance challenge only goes so far in the reports. As Ted Parson has indicated, the authoring committee ducked some of the toughest governance questions, among them whether formal mechanisms should be put in place before proposals for open-air testing of albedo modifying particles and processes might proceed. And there is much work to do to flesh out the reports’ calls for a more “transparent and open process” of deliberation on climate engineering. Still, the primacy given to calls for effective and robust governance alongside physical science investigation should be considered a useful component of the reports.

I’ll be interested to learn what others make of the move, by the authors of the NAS reports, to rebrand the entire climate engineering enterprise as “climate intervention.” Holly Buck, in our FCEA roundup of responses to the NAS reports, suggests that climate intervention is a “more accurate and less hubristic term than ‘geoengineering,’” in part because it shifts the focus from natural to socio-ecological systems. Personally, I’m happy just to stick with “climate engineering,” so long as that word “engineering” is understood as something more than the production of new technological artifacts. And besides, now that the Forum for Climate Engineering Assessment has settled on a name, we’re not eager to change it …

I was struck by some of the framing in the CDR report. Most notable, to me at least, was the reports’ authors suggesting in multiple places that CDR tackles the “cause” of climate change. This was a line that chair of the authoring committee Marcia McNutt also included in her presentation at the reports’ rollout event.

My point here is that problem diagnosis matters. How a problem is understood drives the search for, and colors what counts as, a reasonable response. To say that CDR tackles climate change’s “cause” is a little slippery, I think. It draws an unnecessary and false equivalence between activities aimed at keeping greenhouse gases from ever entering the atmosphere and those aimed at pulling it out. It makes far more sense (and, to be fair, the report actually does say something like this at one point) to keep carbon dioxide out of the atmosphere in the first place than it does to put faith in speculative schemes to draw down carbon once it has already been emitted.

Now, none of this is deny a need for CDR research. A truly game-changing CDR technology could lie around the corner. Or existing CDR proposals could be advanced to such a degree that they really do make a difference to the amount of carbon that can be emitted into the atmosphere before truly deleterious impacts are experienced. I fear, though, that this idea that CDR addresses the “cause” of climate change amounts to a muddying of the reports’ wider message that climate engineering, as we currently understand it, is no real substitute for mitigation.

Note that Robert Tulip has a very different take on this point, in our collection of responses to the NAS reports.

Following on from my point 3 above, here’s one more thing that stood out to me from the CDR report. The report suggests that unless some unforeseen technological innovation completely changes the CDR landscape, then deploying renewable energy technologies will, on average, be more cost effective than trying to pull carbon dioxide from the air. This finding has, I think, significant implications for how we should think about CDR. This is because I imagine that the same calculus likely also applies on the investment and technological development side.

Here’s what I mean: Given the rapid decrease in the costs of clean energy over the last few years, and forecasts suggesting that costs will continue to decline, there may well be more bang for scarce investment bucks from next-generation renewable energy production and storage than from speculative carbon-dioxide removal schemes.

Am I right on this? Such a claim is not a nail in the coffin of CDR, by any means, but it should be seen as reason for skepticism about any notion that CDR might substitute for, or should forestall, action aimed at moving away from fossil fuel use. Or am I missing something?

The reports’ authors tread familiar ground in their suggestion that mitigation is a tough political ask and adaptation presents its own thorny array of social and technical challenges. It is from this foundation that the reports’ authors suggest that it is “prudent to examine additional options for limiting the risks from climate change.” This is interesting, but hardly novel. It’s the argument that Paul Crutzen advanced in his famous 2006 paper on albedo enhancement, namely that complex politics and social dynamics (not to mention dithering by politicians) means that attempts to limit greenhouse gas emissions have been “grossly unsuccessful,” such that SRM should be developed as a backstop option.

Yet the NAS reports also make clear that technological interventions designed to reflect significant amounts of sunlight would, if undertaken, likely amount to an effort that would need to span multiple centuries or perhaps millenniums, given the lack of current evident CDR options and the need to avoid the so-called “termination effect” that would be associated with a sudden halting of albedo enhancement. If that estimate is indeed accurate, then what does this mean about the ability of large-scale SRM interventions to really function as a viable backstop? Does the, “well, SRM is terrible, but we might need it” line still work to justify the advancing of a research agenda and discussion of potential deployment? Or do the governance challenges and considerations pertaining to intergenerational equity force a fundamental reconsideration – “well, SRM is terrible, and so should be avoided at all costs …”?

This is tricky territory indeed. I don’t have any good answers, just lots of questions. Am I misreading the social and political implications of the termination effect? How are comparative risks of ecological and social harm with and without climate engineering to be assessed and weighed? Might SRM be used in the kind of careful, coordinated, strategic fashion argued for by Mike MacCracken in his response to the NAS reports, such that the risks associated with SRM termination are manageable? Or is the road to SRM deployment more likely a rocky one, a road of missteps and miscalculations, such that secure deployment over many generations is a pipe dream? And so on …

The Forum for Climate Engineering Assessment welcomes, as always, the input and insights of our colleagues around the world, and we will continue to work to build a more robust and inclusive conversation around climate engineering proposals. Now that the NAS report is out, please do help us continue to unpack it and make sense of its findings and implications. We welcome short responses, longer blog posts, and other interventions.

You can contact FCEA’s managing director Michael Thompson (michael@ceassessment.org) with ideas and queries. 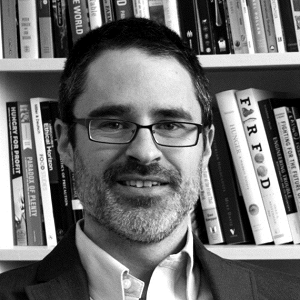 Simon Nicholson, PhD, is Co-Director of the Forum for Climate Engineering Assessment.  He is an assistant professor in the School of International Service at American University, where he directs the Global Environmental Politics Program.  His work focuses on global food politics and the politics of emerging technologies.  Nicholson is co-editor (with Paul Wapner) of Global Environmental Politics: From Person to Planet (Paradigm Publishers, 2014), and (with Sikina Jinnah) of New Earth Politics (in preparation).  He authored The Promises and Perils of Geoengineering, in the World Watch Institute’s Is Sustainability Still Possible? State of the World 2013 report.