The FAA requires proper signage on the payload, including identifying the package as harmless.

The reason I was there was a quote by Rene Descartes that I came across some time earlier. “If I can explain clouds,” Descartes said, “I can explain everything.” With that in mind, I decided to take up clouds as the object of investigation, which would presumably lead to my understanding of everything.

This led to an attempt at making a cloud, and eventually to making the Cloud Machine, a tactical device that could be deployed to create situations for rethinking our impact on nature.

In search for instruction on cloud making, I turned to the internet and found, to my delight, proposals outlining not only methods for making clouds, but for making brighter, more reflective clouds. This method of ‘cloud brightening’ was one of the geo-engineering schemes for intentionally intervening in climate to counteract global warming. The newly made, bright, reflective clouds would shield Earth from Sun’s radiation and thus cool the planet.

The recipe for making a cloud, I found, is deceptively simple: take some water vapor, add to it tiny particles onto which the water droplets can condense (called Cloud Condensation Nuclei or CCN), put it in conditions that would make the water condense (for example by lifting the air into higher altitude where it expands and cools). That’s it. If there are more particles in the air, the cloud droplets will be smaller, and will scattered more light thus making the cloud more ‘reflective.’ It is deceptively simple because whether the cloud will be formed or not depends on the of the atmosphere.

The Cloud Machine is a personal device for atmospheric modification. It consists of cloud-making gear sent up into the atmosphere in a weather-balloon payload. It disperses CCN (salt) and water vapor at preprogrammed altitudes. Moisture in the air condenses into cloud droplets around the CCN, forming into small temporary clouds. After the balloon bursts, the payload descends on a parachute, and thanks to its GPS tracker can be later recovered.

The predicted (pink) and actual (yellow) trajectories of the balloon.

When embarking on this project I knew little about geo-engineering, but I soon realized that what is interesting about a Cloud Machine – and about geo-engineering – is the fact that the cloud and the machine are trading places in our collective imagination. The nature now was conceived as finite, describable by science, no longer inspiring the air of mystery and power it once used to, and which now became the provenance of the machine. Technology was becoming the other to the human society, it had the air of the mysterious and irresistible power, something we both fear and are fascinated by. David Nye calls it the contemporary sublime noting it embodies the contradiction of “simultaneously evoking individual insignificance and powerlessness and being the corollary to and expansion of human power. An extension and affirmation of reason and an expression of a crushing, omnipotent force outside the self.”

The balloon can reach up to 110,000 ft of altitude before it bursts.

Descartes aimed for understanding of the physics of the atmosphere and of its affect – the sense of wonder it evokes in humans.  But the Cloud Machine – and geoengineering – represent a complexity of a different order, a complexity that includes the social systems as an inescapable part of the natural systems. With that in mind I changed the focus of my project: if I can explain geo-engineering, I thought, I can explain everything.

My first Cloud Machine was eventually recovered by an employee of a tree service company who was allowed to collect it – which required climbing up the tree without spiking it, a complicating factor due to the fact that the tree was on a nature preserve, and by law couldn’t be disturbed. The ensuing discussion was a simple proxy of some of the issues I was beginning to see raised in the discussions surrounding climate engineering proposals: controversy around the legality of intentionally changing the atmosphere (on any scale), suspicion of private interest in the name of the public good, confusion regarding the science behind it, unpredictability of the outcomes, or questionable logic of nature conservancy rules, to name a few.

(In my defense: I got a permission to look for the Machine from a friendly woman who answered the door when I arrived at the property. Her husband arrived later and make it explicit that a woman’s permission had little power in that household.)

The project turned into a series of ongoing explorations and interventions structured as workshops and events where participants learn about clouds, climate, and our relationship to nature and technology through hands-on experiences of creating a reality which interacts with, and tests boundaries of, existing systems, social and cultural assumptions, norms and regulations. For example I will finally be able to launch the Cloud Machine in a National Park this summer. The Parks I have approached previously would’t like to have artificial clouds over them (no matter how speculative their actual existence): nature has to be presented to the public in an unaltered state.

The second device, a Cloud Collector, is also sent into the atmosphere on a weather ballon. Clouds condense on its wings and flow into the sample container, which is recovered after the payload returns to the surface. The cloud samples are ingested by volunteers, and examined for microbial life. Clouds teem with microbes, and while it is not clear yet whether they can be understood as an atmospheric biome, it has been suggested that they might play a role in the atmosphere similar to that microbiomes play in other superorganisms – responsible for processes considered intrinsic to their host. The volunteers keep track of their transformation by doing a daily self-observation.

The objective of the project, Thinking Like a Cloud, is inspired by Aldo Leopold’s land ethic motto: ‘thinking like a mountain’. It describes an ability to appreciate the interconnectedness of things over space and time, to see the long view rather than just the immediate demands. Ingestion and structured attention are my ‘outside-in’ model of social change.

Observation is also the method of another project, called Clouds, From Both Sides. In this project the clouds are photographed simultaneously from the ground looking up, and from a satellite looking down. Done while a satellite passes over our geo-location, we take a photograph looking towards the satellite, and record an observation from the perspective of a human experience. The image generated by the satellite’s is later downloaded and the pair of the photographs are displayed together.

Clouds, From Both Sides evolved into PictureSky, an iteration of the project in which the image of the sky is crowdsourced from a group of multiple observers who are positioned at GPS coordinates that form the points of a grid. At the moment of the satellite flyover, they take photographs looking directly up. The images are then stitched together to form a single large image, opposite to the one taken by the satellite.

The crowd becomes a very large sensor, a distributed eye, looking up at the sky, a large, crowdsourced socio-technological apparatus, that comes together to create and image in a participatory and performative action that results in a grid but is at the same time accumulation of messy contextual personal experiences. As opposed to the single photograph, this is a networked perspective.  The single image looking down and the mosaic of images looking up represent not only two opposite visual perspectives, but a model of vertical power relationships and social change approaches: top-down versus bottom-up.

Planning the observer grid in Berlin for PictureSky.

As many thinkers have pointed out, the ability to see the Earth from space was influential in shaping our concepts of ourselves in nature. “Landscape” is a portion of a land which the eye can comprehend at a glance, and as a form is linked closely with social, cultural perceptions of the natural world. This definition of the landscape depends on the frame to mark out the difference between what you see from the unseen. Thanks to ubiquity of satellite imagery, our conceptual frame has been widening and now includes all Earth as seen from space. Such image is a pictorial reinforcement of the concept of nature as comprehensible by scientific description, as finite.

Slavoy Zizek uses the metaphor of meteorology to point out the philosophical necessity of the limit to perspective. He compares the early meteorology and its practice of looking towards the finite horizon beyond which lies the unknown, to the modern satellite meteorology which gives us an image of a global, self-enclosed mechanism and an illusion of completeness of our knowledge about it. “The crucial point is that ‘meaning’ can emerge only within such a finite horizon: weather phenomena can be experienced and conceived as ‘meaningful’ only in so far as there is a Beyond out of which these phenomena emerge,” Zizek writes. “The paradox is that although this traditional ‘closed’ universe confronts us with unpredictable catastrophes which seem to emerge ‘out of nowhere’, it none the less provides a sense of ontological ‘safety’, of dwelling within a self-enclosed finite circle of meaning where things (natural phenomena) in a way ‘speak to us’, address us.” 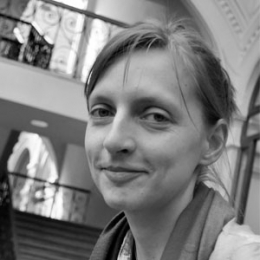 Karolina Sobecka is an interdisciplinary artist and designer.  Her artwork often engages public space and explores the way we interact with the world we create.  Her recent projects focus on narratives that inscribe humans in nature.  Karolina’s work has been shown internationally, including at the V&A, MOMA Film, Beall Center for Art + Technology, Zero1, ISEA, Marfa Dialogues and Science Gallery. She has received awards including from the Creative Capital, Rhizome, NYFA, Princess Grace Foundation, Vida Art and Artificial Life Awards and Japan Media Arts Festival.  Karolina is the founder of an art and design studio Flightphase, and is currently teaching at Rhode Island School of Design.