Biochar (usually classified as a climate geoengineering option) is charcoal produced through the thermochemical decomposition of organic material at elevated temperatures in the absence of oxygen. The process has been touted by some proponents as a potentially important component of climate policymaking over the course of this century. Because biochar can sequester carbon in soil for hundreds to thousands of years, supporters argue that it constitutes a “carbon negative” process:

“Ordinary biomass fuels are carbon neutral — the carbon captured in the biomass by photosynthesis would have eventually returned to the atmosphere through natural processes — burning plants for energy just speeds it up. Sustainable biochar systems can be carbon negative because they hold a substantial portion of the carbon in soil.” (International Biochar Initiative) 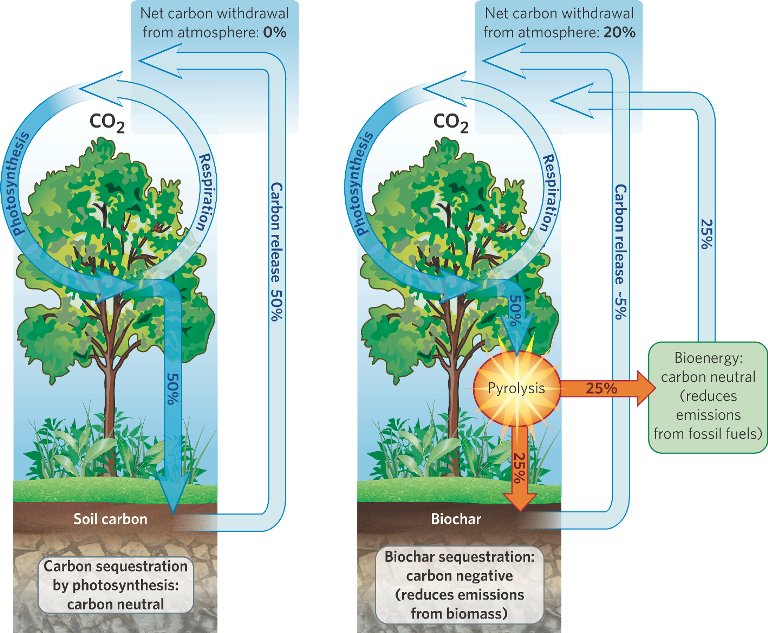 Biochar has been fulsomely characterized by climate activist Bill McKibben as “the key to the New Carbon Economy,” and received prominent coverage in the Working Group III report of the IPCC’s Fifth Assessment Report as one of the technologies that could effectuate negative emissions scenarios that might be critical to avoiding the passing of critical temperature thresholds. However, an article by Melissa Leach, James Fairhead and James Fraser in 2012 in the Journal of Peasant Studies (free subscription required) sounds a cautionary note in terms of potential implications of a full-scale commitment to biochar for farmers, with a focus on Africa.

Among the conclusions of the article:

In contrast to the rather dry rendition of the potential socio-economic threats posed by biochar projects in the IPCC’s Fifth Assessment Report, this article is a stark reminder of how such projects pose the threat of exacerbation of existing inequalities associated with climate change. Moreover, while some proponents of carbon dioxide removal (CDR) climate geoengineering approaches argue that they are more benign than solar radiation management (SRM) approaches because they allegedly don’t threaten trans-boundary impacts, this article is a palpable reminder that this is not necessarily the case.